On 6 April a new Marriage Allowance comes into effect, offering tax benefits for eligible couples - those married or in a civil partnership. 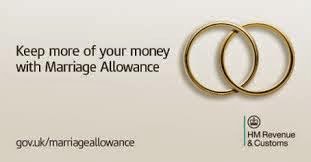 For 2015/16 the personal income tax allowance will rise to £10,600. In situations where one partner's earnings are less than this (including pensions, savings or investment income) they may be entitled to the Marriage Allowance. The scheme allows the transfer of 10% of unused personal allowance to a partner.

The partner making the transfer, which could be up to £1,060, must themselves have earnings within the basic income tax threshold - which is increasing to £42,385 for 2015/16. Making full use of this relief could save couples up to £212 per year. If one partner earns over the basic rate then the couple will not be eligible for the new allowance.

Prime Minister David Cameron said: 'I made a clear commitment to the British people that I would recognise marriage in the tax system. We can afford to do it because of the growing strength of the British economy. And as a result, it means families up and down the country can get a little bit of extra support and more financial security.

'This policy is about far more than pounds and pence. It's about valuing commitment.'

Chancellor George Osborne added that the measure means 'saving £212 on your tax bill couldn't be simpler or more straightforward'.

However the new Marriage Allowance received some criticism from both Labour and Liberal Democrat MPs when the measure was first announced in the Autumn Statement 2013.

Stephen Williams, former Treasury spokesman, said: 'You don't build a fairer society by using the tax system to favour one type of family over another'.

The Government estimates that over four million married couples and 15,000 civil partnerships will benefit from the new measure. You can register and make your application online here.
Posted by Unknown at 09:08

Email ThisBlogThis!Share to TwitterShare to FacebookShare to Pinterest
Labels: Tax